Annie
..an american and her scottish husband living contentedly on a scenic coastal road in west scotland since 2000.

I flew from Glasgow to Shannon on Thursday even though the conference didn't begin until Friday evening. I've been to Cashel twice before on day trips to the Rock of Cashel but I'd never explored the town or the surrounding area.

Before getting on with details of the conference I'll give my personal observations.
Accommodation:
I was well pleased with my B & B which is quite close to the foot of the Rock of Cashel. My B & B was Ladyswell's House B & B. It's an attractively decorated and furnished guesthouse with delicious breakfast - hot or cold, and the hostess and her assistant were eager to help and very friendly. My room was comfortable and attractive although a bit small. I had a view of the Rock of Cashel from my bedroom window.

The grand opening of Bruden Fidelma, the Fidelma-themed guesthouse, was officially opened by Peter Tremayne at 5pm. It was well-attended and the host and hostess served wine, other refreshments and snacks. Bruden Fidelma B & B 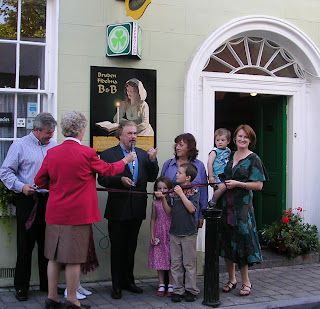 Peter cuts the ribbon.... in the photo are from left - PJ (owner of B & B), Ann Devitt of the Cashel Arts Fest Committee, Peter, his wife Dorothy, Olivia (owner of B & B) and their children

Registration for Feile Fidelma began at 7 pm at the Cashel Palace Hotel and included even more wine and cheeses, etc. So, personally speaking I was in a very relaxed state when Peter Tremayne's opening talk began at 8pm! His talk was, as I expected, interesting and entertaining.

I did not take notes on the talks because I would have missed too much myself by doing so. Therefore, I'll just give a brief opinion of each.

9:30 am - The Impact of Sister Fidelma on Irish Crime Fiction - Dr. John Scaggs

The talk was interesting with comparisons to other authors - all of them having an Irish connection. I found the portions which were Fidelma-related to be interesting but I don't have a lot of interest in modern mysteries.

10:30 am - Smoke in the Wind: Ireland and Wales - historic and cultural links in the 7th century - Dr. Andrew Breeze

This talk held my interest most of the time as Dr. Breeze is an excellent speaker. I was quite interested in his discussion on the Mabinogian being written by a woman - I've read a few of the stories in the Mabinogian - a collection of Welsh tales.

Coffee, tea and a wide selection of gorgeous biscuits (cookies) and cakes!!

The demonstation that there was in fact a total eclipse on the date that appeared in Absolution by Murder during the Synod of Whitby was interesting. However, not having a more than general interest in astronomy I'm afraid my attention often drifted during a good portion of this talk.

The majority of attendees were on the coach tour which pointed out several sites in the Sister Fidelma books. As the bus was hot I think many of us found this trip tiring. I think we all enjoyed stopping at Emly which is the setting in more than one book. All evidence of this ecclesiastical centre is gone but there is a beautiful church on the site. 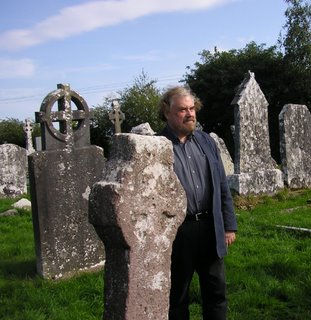 Peter Tremayne poses at Ailbe's Cross on the site of Emly. 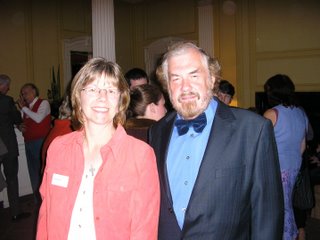 I was one of the few fortunates to have bought my copy of the new book A Prayer for the Damned at the Cashel Heritage Centre when it opened on Friday morning. The local bookshop did not get its shipment and, therefore, many fans did not get an autographed copy. I asked Peter to autograph my book at the B & B grand opening. Both he and his wife are quite friendly.

Posing with Peter Tremayne on Saturday night before the big dinner.